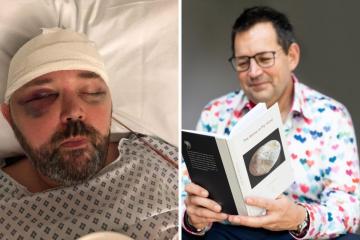 A man from Sutton who has been called a “walking miracle” by doctors has published a book telling of the remarkable story of his brain tumour.

Tim Cooper, now 57, had enjoyed a day with friends playing golf and eating out in October 2018 before he collapsed suddenly late at night on a road in Morden.

His face hit the pavement hard and a young man who lived round the corner came to his rescue and called an ambulance – just as his wife called to ask if he was on his way home.

Where the extent and severity of his fall was not yet clear, ambulance waiting times meant Tim’s wife drove an hour from their then home in north London to take her husband to Kingston Hospital.

Tim, who works in marketing, was seated in the A&E waiting room when he “projectile vomited dark matter” – which he now knows was dead blood in his system.

Tim says it was then that the doctors realised he hadn’t just fallen over and damaged his face, but instead it was that he had suffered a seizure.

He told Your Local Guardian: “Clearly something serious had gone wrong inside for me to collapse and, after I’d been sick, I was rushed through to the emergency area and was taken for a CT scan.

“It revealed two tumours right across the two frontal lobes of my brain.

“That night, I was diagnosed with brain cancer, and myself and my wife were left with an awful lot to deal with.

“Quite frankly, I was lucky to be alive.”

Tim was then referred to the specialist neuroscience team at St George’s Hospital in Tooting.

He stayed in hospital from the early hours of the Sunday morning when his wife had taken him in, through to the following Thursday.

He was put on heavy medication and steroids to stop the activity in his brain and to stop the tumour from getting worse.

Tim, who has titled his book The Stone In My Head, said: “The consultant told me it was a huge tumour because the two had joined, and that I had already been given the best option because it didn’t kill me straight away.

“I could have had a fatal cardiac arrest and was told I had an awful lot to be grateful for.

“I was operable on three weeks after my collapse and got through the seven-hour operation with no mistakes.

“I woke up with an excruciating headache but I was able to tell my wife I loved her and it was the start of a new beginning.”

Tim said he went through a number of ups and downs with his medication throughout 2019 – but “came out the other side”.

He added: “The challenges caused myself and my family some considerable distress as the medication that was supposed to be making me better turned me into someone I really wasn’t.

“It was a traumatic time but I got to a good stage of improvement by the end of 2019 and the Covid lockdown really helped me to relax.

“Now, I only go for an annual check-up – and I know that my recovery could have been completely different to what it has been.

“There were chances the operation could have affected my eyesight, mobility and my speech and I’m so lucky to have come through.

“I was ‘back to the original version of Tim Cooper’ according to my friends and family.”

Tim said it is important for him to document his journey and that he’s enjoyed the writing process.

He explained it has been “very cathartic” for him and his wife who want to offer hope to others in his situation.

Tim added: “I’m in the small percentage of those who recover and I’m a ‘walking miracle’ says my surgeon.

“They were really taken back by the tumour size and the surgeon reckons it could have been growing for five years – it’s very frightening.

“One minute I was playing golf and the next I was in hospital with a very fatal medical condition.”

Tim had his three-year-old niece living with him at the time of his diagnosis, and had to give her an “age appropriate” explanation of why he had been in hospital and had a bandage on his head.

Tim said: “I explained to her that I had a stone in my head – and that’s why the book is called that.

“I picked a stone because it’s had a similar shape.”

Tim says his outlook on life now is totally different – and he would sign all communications while he was unwell with ‘onwards and upwards’.

He added: “The brain is a powerful tool but it can bring the worst of the thoughts to you.

“I want to share my story and help others.”

The Stone In My Head is available online now – and Tim’s website can be viewed here.