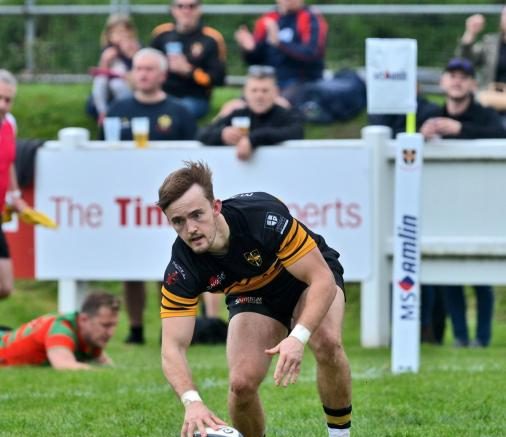 Confident Esher despatched a resilient Old Albanian side with six tries to maintain their place among the pacesetters.

The Elmbridge side, level on points at the top with Redruth, made it five wins in a row after being stretched at times, their own line being breached three times.

Dan Rowland sent the hosts in front after just four minutes as Esher’s pacy backs punched a hole on the left and then rapidly switched flanks for the speedy wing to race through a gap and touch down near the corner flag. And they looked set for a second as the pack made inroads only to be halted by an infringement as they neared the line.

Like the home side, OAs are dangerous on the break and despite being down to 14, following a yellow card on 20 minutes, responded superbly with a try from constantly dangerous scrum-half Elliot McPhun on 27, converted by Daniel Watt to put his side 7-5 in front.

The response came within three minutes, No 8 Harvey Scott storming through, and although Sam Morley again missed the conversion – he is rarely off target – Esher were never to be headed again. Their pack had one of its best days of the campaign so far, underlined by shoving their way over from a lineout just before the interval and lock Hugo Sloan being credited with the try among a sea of bodies.

Morley was back on target and his side reached half time 17-7 ahead.

They suffered a nasty shock straight from the restart, wing Alex Noot sprinting over within seconds on the right and running round behind the posts to give Watt the simplest of conversions, which narrowed the gap to three points.

The confidence born of a strong run kicked in for Esher, reasserting control when centre Chris Davies refused to allow the close attention of two defenders to stop him touching down and Morley making it 24-14.

Albanians only made their task of getting back into the match much harder by suffering a second yellow card and were punished by a flowing move which climaxed in Harri Lang – deputising for the prolific Tom James on the left wing – diving in for a grandstand finish which delighted the Molesey Road crowd. Morley slotted from a tight angle and quickly added a penalty which added to the visitors’ problems by making the gap 20 points.

OAs showed they were not done yet, though, wing Alessandro Ricci capping a fine break from deep by scoring their third, Watt adding his third conversion. Any hope of a dramatic comeback was terminated by Jack Lavin, enjoying another superb match for the home side at full-back, making a lightning interception in his own 22 and then racing down the right flank before setting up Morley for an easy kick.

Esher face another potentially tough match on Saturday when they host Guernsey – thriving in fourth place – with the match kicking off an hour earlier than usual at 2pm.

A man from Sutton who has been called a “walking miracle” by doctors has published a book telling of the remarkable story of his brain tumour. Surrey Comet | Kingston …