New infections of Covid-19 rose sharply in both Kingston and Epsom recently according to the latest data released by Public Health England (PHE).

The neighbouring boroughs at the south west edge of London both saw significant increases in the number of new cases they reported in the seven days up to October 17 as per the PHE data.

The data follows health leaders’ concerns regarding the government’s strategy at handling the virus and the current pressures on NHS services.

The government however insist that existing strain on NHS workers due to the pandemic and other pressures does not yet necessitate changing their current ‘Plan A’, which revolves around booster vaccines but no extra measures such as mandatory mask wearing or restrictions on indoor gatherings. 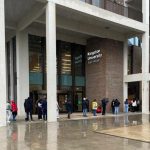 Speaking on a visit to the Covid-19 vaccine centre at the Little Venice Sports Centre in London on Friday (October 22), Prime Minister Boris Johnson said: “Our autumn and winter plan always predicted that cases would rise around about now and we’re certainly seeing that in the numbers.”

He added that we are seeing “high levels of infection” but suggested they were not outside the parameters of what was predicted. “But it’s very important that people do follow the guidance on general behaviour, on being cautious, on wearing masks in confined places where you’re meeting people you don’t normally meet. Wear a mask, wash hands, ventilation, all that kind of thing, but also get your booster jab, and that’s the key message that we want to get across,” he said.

A man from Sutton who has been called a “walking miracle” by doctors has published a book telling of the remarkable story of his brain tumour. Surrey Comet | Kingston …